Luca Marchetti is a professional photojournalist.

He began his journalistic process in 2005 by collaborating with newspapers and news agencies. After a continuous collaboration with a sports monthly, in 2008 he enrolled in the register of journalists as a publicist.

Over the years he has been involved and continues to deal with news and sports photography, especially football, but also other sports such as cycling, motorcycling, kayaking, swimming, athletics and much more, also available for extreme sports. He also deals with reportage of all kinds available for foreign countries and for long periods. Among his various experiences are Tunisia and Morocco.

He begins to collaborate with the LRphoto agency, then, in 2013, with the photo agency Activa foto.

From here he begins to photograph the matches of Serie B and Serie A, a stage of the Tirreno Adriatico in 2013, the Exo Tour – Marmore falls Kayack Race of 2012 and 2013, the final of the 2016 Italian Cup, some matches of the National football team of the national team under 21.

In the archive you can find many of the photos he took, giving ample space to football but also to other sports, and reports. 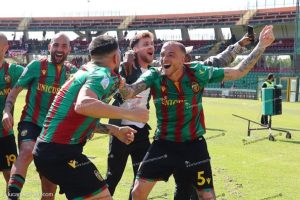